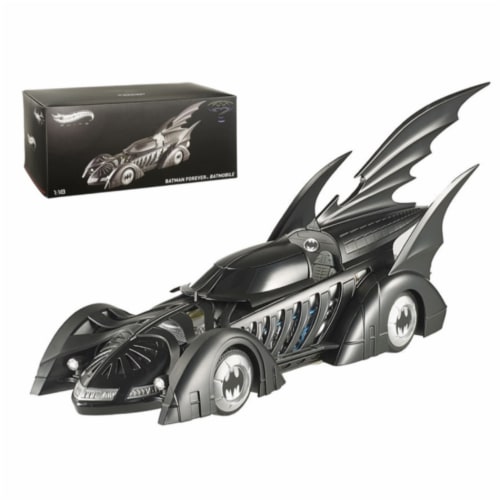 Brand new 1:18 scale diecast car model of 1995 Batman Forever Batmobile Elite Edition die cast car by Hotwheels.
Brand new box.
Rubber tires.
Detailed interior, exterior.
Made of diecast with some plastic parts.
Dimensions approximately L-10.5, W-4, H-3.5 inches.
Based on the legendary DC Comics character, the film Batman Forever was directed by Joel Schumacher and starred Val Kilmer as Batman. This movie was the third of Warner Bros. Pictures' Batman series, at the time. With a claimed maximum speed of 330 mph and the remarkable ability to climb straight up walls, the Batman Forever vehicle is one of the most famous BATMOBILES of all time.
To accentuate the fabulous lines of this car, the engine and wheels were indirectly lit so that they appeared to glow blue. Our 1:18thscale model features remarkable details, from the swooped sky-high tail fins to the shark-like grille that struck fear into the hearts of bad guys all over Gotham City.
Batman fans will surely love this extraordinary model!