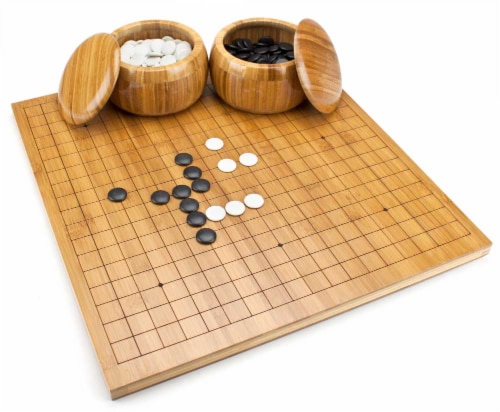 To most western players, the game of Go is an enigma. Invented in China 4,000 years ago, it has no proper analogue in the West. It's like chess, but endlessly more complex. Focused more upon territory control and less about capturing the opponent's pieces, there are between 150-250 valid moves a player could make on any turn. For chess, this number never climbs above 37. It is said there have never been two identical games of Go, and until March 2016 when AlphaGo soundly defeated Korea's Lee Sedol 4-1, there had not existed a computer program that could reliably beat Go experts--let alone the masters.

Elegant Simplicity
Despite this, Go is surprisingly easy to learn. There are only two rules: 1. Every piece that remains on the board must have at least one open point (called a “liberty”�) directly next to it, and 2. Players are not allowed to make a move that would return the game to a previous position.

Good to Go
Unlike many listings for separate boards, bowls and stones, this complete set includes a matching goban (board) and go-ke (bowls) with a beautiful dark wash, as well as a full complement of 180 white and 181 black go-ishi (stones). Single-convex in the traditional Chinese style, these go-ishi are made from bakelite, have a good weight, and, when placed, make a satisfying clack.

Traditionally, Go boards are not a perfect square, but slightly oblong, which thanks to foreshortening creates for players the visual effect of a perfect square. This is a solid 47x44cm table board with the standard 2cm thickness and great heft. Better yet, it's reversible: the top side features the time-tested 19x19 board layout, and the underside features a beginner-friendly 13x13 layout for quicker, simpler play.